“Beyond That Last Blue Mountain” her book detailing her adventurous life in Afghanistan, Iraq, Bosnia and Syria.

Harriet Sandys first started her business in London in 1983 selling carpets, kilims and decorative items for Afghanistan and India.

During the 1980’s she made frequent visits to the bazaars of northern Pakistan and to the desert villages of Rajasthan buying artefacts for her business.

In 1987 she was commissioned by Eon Productions Ltd at Pinewood Studios to buy the Afghan costume for the James Bond film ‘The Living Daylights’. 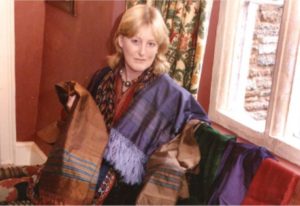 In the spring of 1989 while visiting Pakistan’s northwest frontier, Harriet discovered several families of traditional silk weavers living in an Afghan refugee camp about twenty five miles south of Peshawar, on an arid tract of land in the shadow of the Kohat mountains.  The men, all skilled weavers, had escaped the conflict in their homeland and had taken jobs as road labourers on the Grand Trunk Road around Lahore, miles away from friends and family.  Harriet obtained funding from the Swedish Government to buy the weavers handlooms, dyes and silk yarn.  The men gave up their work on the Grand Trunk Road, returned to their homes in the camp and began to weave silk shawls which were sold through Save The Children USA in Peshawar and Islamabad.  This project has now relocated to Kabul, Afghanistan.

In 1992 Harriet was asked by UNESCO to organise and run a training programme for three months in ikat silk weaving and natural dyes in the northern Afghan city of Mazar-I-Sharif.  Weavers came from all over Afghanistan to participate in the training programme held in the assembly hall of the Sultan Razia Girls school.

Harriet moved to Somerset in 1997 and now gives lectures about the embroideries and weavings’ of Afghanistan and Pakistan. In 2018 her book “Beyond that Last Blue Mountain”  detailing her adventurous life in Afghanistan, Iraq, Bosnia and Syria was published. Click here for further details

If you would like to know more or would like to purchase something you have seen on the site please do not hesitate to contact Harriet who will be only to happy to help.

There are no upcoming events.